The Parish Church of St. Katherine in the New Forest village of Exbury, contains a stunning memorial dedicated to two local brothers who lost their lives in World War One, John and Alfred Forster. Their parents, Lord and Lady Forster of Lepe, commissioned sculptor Cecil Thomas to design the monument. During the war, Cecil had been a patient at the same hospital in London as Alfred. Over a four month period, the two young men became firm friends.

The monument is housed in a Chapel extension, built 1927/8, which is also dedicated to other Exbury parishioners who lost their lives during the war:

In 1890, Lord Henry Forster – 1st Baron Forster GCMG PC DI (1866-1936) married the Hon. Rachel Cecil Douglas-Scott-Montagu GBE (1868-1962). Lady Forster was the daughter of 1st Baron Montagu of Beaulieu, Hampshire. The Forsters originally lived at Southend Hall, Bromley until 1914 when Lord Forster found the new, noisy trams unbearable and decided to move away. He leased his home to Brittania Film Company on 17th August, 1914 and it became a thriving film studio.

In addition to John and Alfred, the Forsters had two daughters. Emily Rachel (1897-1979), who married Captain George Henry Lane-Fox Pitt-Rivers (1890-1966), the grandson of Archaeologist, Augustus Henry Lane-Fox Pitt-Rivers (1827-1900) and founder of Pitt Rivers Museum at the University of Oxford.  Emily became a stage and screen actress using the name, Mary Hinton. There is a memorial plaque dedicated to her in St. Katherine’s Church. Emily also had a sister, Dorothy Charlotte Forster (1891-1983).

One of Emily’s three sons, Michael (1917-1999), gained notoriety in the 1950s when he was put on trial charged with homosexual offences. He was found guilty and sentenced to eighteen months imprisonment. Michael later became instrumental in the 1967 decriminalisation of homosexuality.

Lord Forster was an ambitious gentleman who enjoyed a long and successful political career both as a Conservative M.P. and later as 7th Governor-General of Australia (1920-25). Following the general election in 1892 he became M.P. for Sevenoaks. In 1901, he took-up office as Deputy Lieutenant of Kent then 1902-05, he was Junior Lord of the Treasury. Between 1902 and 1911, he was the Conservative whip.

During World War One, Lord Forster was assigned to the War Office. Between 1915 and 1919 he acted as their Financial Secretary. In 1918-19, he represented Bromley in the House of Commons and in 1919, was given a peerage, 1st Baron Forster of Lepe in the County of Southampton. Lord Forster became Governor-General of Australia on 7th October, 1920, a post he held until 1925 when he moved back to England. Lord and Lady Forster resided at Exbury House, near Southampton, until Lord Forster’s death in 1936, aged seventy.

Because the Forsters had no surviving sons, the barony became extinct upon Lord Forster’s death. Sadly, this was an all too common occurrence for many aristocratic families after the war who were left with no male heir(s) to inherit either property or title.

John Forster was born on 13th May, 1893.  Educated at Eton, John was commissioned in September, 1913 and served as 2nd Lieutenant in the 2nd battalion King’s Royal Rifle Corps. On 14th September, 1914, at 3am, John’s battalion advanced in thick mist and driving rain to attack the ridge above the River Aisne (Chemin des Dames), the first Battle of The Aisne. When they reached the crest, they were unable to continue further and found themselves pinned down by enemy fire coming from the occupied sugar factory at the crossroads above Troyon.

John died on 14th September, 1914 and is remembered on the La Ferte-sous-Jouarre Memorial, Seine-et-Marne, France. The memorial is to those killed in August, September and early October of 1914 who were part of the British Expeditionary Force. There is also a wall-mounted bronze plaque, by Cecil Thomas (see images above and below), dedicated to John, in St. Katherine’s Church Memorial Chapel.

Alfred Henry was born on 7th February, 1898. Educated at Winchester College (1911-1915), then RMC Sandhurst. He was commissioned in the 2nd Dragoons Guards (Royal Scots Greys) on 19th July, 1916. The following February he went to France and was promoted to Lieutenant on 19th January, 1918. On 17th October, 1918, Alfred fell, seriously wounded, near Le Cateau. He was transferred to Gerstley-Hoare Hospital for Officers at 53 Cadogan Square, Belgravia, London, where he spent five months.

The Gerstley-Hoare Hospital was set-up by Louise Hoare, cousin of politician Samuel Hoare (1880-1959). Louise had joined the British Red Cross as a V.A.D. and together with her wealthy friend, Mrs Adele Gerstley, established the Hospital in January, 1916. It was a Class A Hospital with twenty-five beds, there were three trained nurses, five full-time and twenty part-time V.A.D.s. Mrs Gerstley was the administrator and Miss Hoare the Commandant.

Gerstley-Hoare Hospital was affiliated with Queen Alexandra’s Military Hospital at Millbank, London and admitted casualties direct from the front rather than via a military hospital, as would normally be the case. The Hospital closed in April, 1919 and during just over three years of service, treated five hundred and fifty servicemen only two of whom died, Alfred was one of them. He died of his wounds on 10th March, 1919.

During his time at Gerstley-Hoare, Alfred met the sculptor Cecil Thomas (1885-1976), also a patient, the two became great friends. Alfred is buried at St. Katherine’s Church. Cecil designed the stunning tomb dedicated to Alfred which is in the Church’s Memorial Chapel. Such is the quality of the bronze figure that it was exhibited at the Royal Academy in 1924. The Chapel’s Hanging Lamp, presented by Miss Amy Fergusson, was also designed by Cecil.  A model of the tomb is in the V&A, London.

Cecil was born 3rd March, 1885 at 24 Hedley Road, Shepherds Bush, London. His father had a gem engraving business in London and Cecil began his training there followed by Central School of Arts and Crafts, Heatherley School of Fine Art and then the Slade. Cecil enjoyed a long and very successful career as a sculptor, medallist, gem sculptor and seal engraver. In 1948, he designed a Seal for the British Transport Commission. Together with artist, Edgar Fuller, Cecil produced the reverse designs for the sixpence, two shillings and half crown. He also received commissions from Faberge.

Cecil designed a sculpture of Rev. Dr Philip Thomas Byard ‘Tubby’ Clayton CH, MC, DD. (1885-1972) a World War One Chaplain who, together with Rev. Neville Stuart Talbot (1879-1943), founded Talbot House. Located in Poperinge, Belgium, Talbot House (better known as Toc H, see images above and below), provided soldiers, fighting on the front lines around Ypres, with a tranquil haven for relaxation and private reflection. Soldiers of all ranks were welcomed. Cecil’s effigy of Rev. Clayton is in All Hallows By The Tower in the City of London where Clayton was vicar from 1922 until his retirement in 1952. 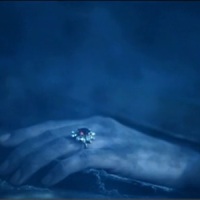 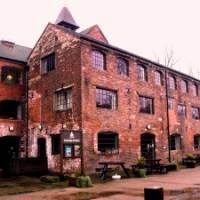 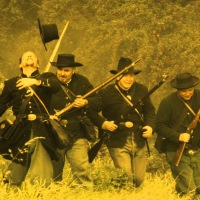